Good things come to those who wait! Finally, after a year of construction, Okotoks Ford Lincoln has proudly opened the doors to an amazing new home. It has been specially designed to offer the best in customer service. Located on almost five acres of land, the new facility is 42,000 square feet and features separate Ford and Lincoln vehicle showrooms, a used car centre and a stand-alone Quick Lane Tire and Auto Centre.

As part of the celebration, country music singer George Canyon performed for one hour and signed autographs for those in attendance. The Calgary Burns Club Singers and the Rocky Mountain Pipe Band also provided entertainment throughout the late afternoon and evening.

One of the most noteworthy special guests; Dianne Craig, president and CEO, Ford Motor Company of Canada, thanked Gerry Wood, principal owner, firstly for his investment in the dealership, then his commitment to Ford and Lincoln and his dedication to helping the community. Craig says the number of organisations that sees a contribution by the dealership is phenomenal.

Operating as part of the Wood Automotive Group owned by Wood, the new Okotoks Ford Lincoln has increased its service area to 30 bays and is equipped to handle everything from Fiestas to Super Duty diesel trucks. The new amenity-rich customer lounge has a fireplace, 60-inch television mounted on the wall and a great new coffee bar. Trust us, it’s delicious.

New car owners can explore and learn about their new vehicle’s features without facing the elements in the dealership’s two new indoor delivery pods. Gone will be the days of standing in two-foot snowdrifts with a salesperson as they try to show the exciting features of a brand-new vehicle. The future is here, and it’s nice and warm.

The old dealership building has also been given a new life with a renovation and facelift. It is home to the new Quick Lane Tire and Auto Centre which will offer speedy oil change and lube service, as well as automotive detailing services. The current sales area has also been redeveloped to serve as the home of the Okotoks Ford Lincoln used vehicle sales department.

Gerry Wood has never lost sight of the importance of personal service and a fair deal. As owner of some of the largest dealerships in Western Canada, he started his legacy as a pioneer in Calgary’s automotive industry in 1983 when he acquired Southridge Lincoln Mercury, and renamed it Woodridge Ford Lincoln. Ten years later Wood expanded to form Wood Automotive Group. After continued growth and expansion it now encompasses five automotive dealerships and a separate All-Makes Collision Centre facility for auto body repair and maintenance. All maintaining the same high standards kept at Wood’s very first dealership.

Okotoks Ford Lincoln has been committed to exceptional customer service and satisfaction for over 25 years. This new facility will continue the tradition, serving Okotoks and the surrounding foothills for many years to come. Be sure to pay a visit. 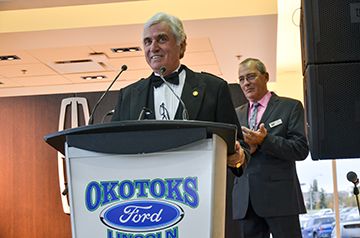